8 Differences Between a Boss and a Leader 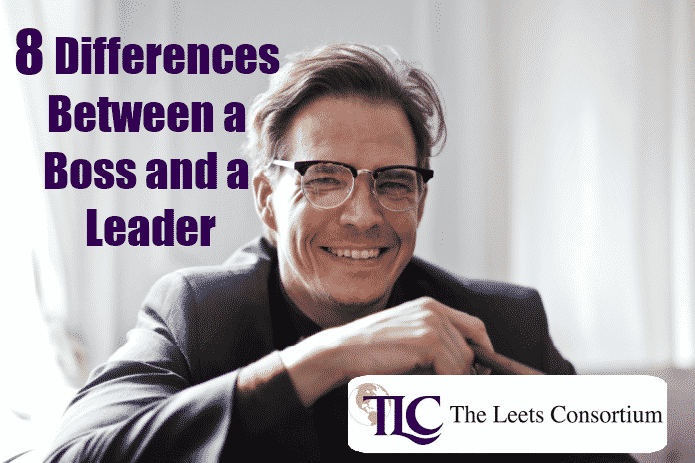 You may think a “boss” and a “leader” are two interchangeable positions. After all, don’t they both indicate being in charge?

On the contrary, there are stark differences between bosses and leaders. Using them interchangeably can undercut the real value of both. It will also impact how you approach your role as either one or the other. Each has their place.

So what’s the big deal about being a leader vs. a boss? Here are the major differences – and how you can decide on the correct role for you.

1. A Leader Leads; A Boss Delegates

It might seem a bit silly to emphasize that “a leader leads.” After all, that’s what the name implies. However, this gets to the heart of a main difference behind leaders and bosses.

A boss’s leadership starts when they get to work and ends when they leave.
A leader never stops leading, because it’s an integral part of their character.

Delegating tasks should be a part of your job, not your job as a whole.

Obviously, you need to be able to delegate tasks. That’s why your job gave you the ability to do so. However, if you want to be a true leader, you need to think about your job as less of a job and more of a lifestyle. Being a leader is all about who you are as a person.

2. A Leader Listens; A Boss Fixates On Work

There’s nothing wrong with paying attention to work when you’re at work. After all, getting distracted by menial tasks is a bad choice. So is allowing your team to wander into fluff concerns, rather than actionable steps.

The key difference here has nothing to do with whether or not you care about your work. It’s all about whether or not you’re willing to listen to your employees, even if that means stepping away from work for a time.

Remember, employees are people. The reason no one likes a boss is because a boss’ work defines them. Bosses aren’t likely to take time out of their day to listen to why you’re having a hard time and may need a break. Leaders are going to understand that effective leadership requires compassion and empathy for the people following you.

Ask most people who’ve had a boss and you’ll generally hear one complaint. They hated how their boss treated them as “nothing but a number.”

Part of your job as a supervisor is to monitor employee performance. That, in and of itself, isn’t a problem. It can become a problem, however, if your employees start to feel like they’re nothing more than their performance.

As a matter of fact, focusing on nothing but numbers can actually be detrimental to your business’ success. Employee satisfaction has a direct impact on customer satisfaction. When you have happy employees, you have happy customers. Focusing less on numbers and more on your employees will actually boost your sales, which is another reason to understand these major differences.

4. A Leader Can Take Constructive Criticism; A Boss Feels Above Their Employees

No one genuinely enjoys being criticized. Some may take feedback better than others, but hearing difficult truths about your performance can be difficult to accept.

However, leaders will accept criticism. A boss won’t. In fact, they may even respond badly to employees who point out areas for improvement or mistakes that were made. Don’t be fooled – this boss’s employees are still criticizing the boss. The key difference here is that unhappy employees are going to criticize you behind your back.

Plus, some professionals believe that humility is a trait that many successful CEOs possess, putting you in good company.

5. A Leader Inspires; A Boss Focuses Only on Meeting Goals

No one wants a leader to give up on encouraging people to meet their goals. It’s absolutely a good idea to encourage employee performance as a whole.

A problem can arise, however, when meeting goals is the one and only thing you’re focused on. If you’re so determined to reach the sales quota that you can’t let people take breaks, they’re going to lose interest in the job and their work efficacy is going to wane.

Instead, you want people to push for their goals because they want to meet those goals. Leaders inspire people to meet sales goals and other business-centered goals not because of some mythical “quarterly goal.” Instead, it’s because that’s a measure of how well your team functions.

It’s always better to inspire people to strive for their goals, rather than to try and force them to meet those goals on your terms.

6. A Leader Understands the Spirit of a Rule; A Boss Follows the Rules On Paper

Obviously, rules are there for a reason. However, you should ask yourself why you’re following certain rules, especially if they’re rules you’ve created and are allowed to change.

Do you just want to make sure employees follow the rules, or do you want to make your company more successful? Oftentimes, effective leadership requires that you think about why you’re really following certain policies.

7. A Leader Influences; A Boss Manages

For the most part, bosses see themselves as managers first and leaders second. In this case, they also tend to see employees as numbers. When you’re just looking at numbers on a screen, it’s easy to say, “This person should have higher numbers” or, “This person should be making more calls.”

A key difference between bosses and leaders is the fact that leaders are always thinking one level deeper. When you’re able to look under the surface, you’re more likely to fix the problems you’re seeing. That’s a powerful ability.

8. A Leader Encourages People to Succeed; A Boss Makes People Strive for Contentment

Perhaps the most distinct difference between leaders and bosses is how they see the future. Bosses see their jobs as just that: jobs. To a boss, it doesn’t matter if an employee has leadership potential. It only matters if that employee is meeting their sales goals.

The thing is, most employees want more than being a junior-level worker all their life. If you don’t recognize that, you run the risk of making employees feel stifled.

This is exactly why being a leader is so important. What actions do you take when you recognize an employee has the ability to achieve more? You should address that and encourage them to follow their dreams. However, you won’t notice that if you never really talk to your employees.

The difference here is that effective leadership understands how important it is to nurture your employees in every aspect.

Boss vs. Leader: Why Does This Difference Matter?

Leaders and bosses are, at a glance, the same. After all, a dictionary might use them synonymously. They’re both individuals who lead another group of people. However, there are strong nuances that separate these two. Even more crucially, when you see a boss vs. a leader in practice, you can see the difference.

Leaders encourage growth, gain loyalty from their subordinates, and generally see more success in their ventures. This is because they offer something bosses don’t. Sure, both people have supervisory roles, but when have you ever heard someone talk about how much they love their boss?

Have you instead heard that people love a leader?

Understanding the difference starts with intention.

The Path to Becoming a True Leader

As you can see, the difference between a leader and a boss has nothing to do with if there are people who follow your guidance. It’s about whether your authority comes exclusively from your position or whether it comes also from your personality.

There’s nothing wrong with being a supervisor – but there are benefits to becoming something more.

To be a leader, you should strive for effective leadership, not just an ability to delegate tasks. You should understand that the best supervisors care about people far beyond their ability to support the company. That’s the driving force you want behind every choice you make as a leader.

If you’re a leader and not a boss, your employees will more than likely respond positively every time.